About 20 years ago a young couple on an outing to the far reaches of Latgale [eastern Latvia] met and recorded a couple of local traditional musicians and singers. Ilmārs and Janta Mežs kept in touch with one of the musicians – a violin player – and this past summer Janta invited me and another friend along to Latgale to meet him and to see whether there were any other traditional singers and musicians left in that area. We focused on the town of Šķaune and its surrounding area, which is right on the Latvian border with Belarus, about 20 miles east of Dagda. First, though, we needed to apply for permits to enter the border area and then present them at the border patrol office in Šķaune, or else face searches and reprimands by patrolmen. Apparently a lot of smuggling goes on across the Belarusian border, which is also a frontier of the European Union and the newly expanded Schengen free-travel zone.

We did meet the violin player, but he was stubborn and drunk and didn’t want to play his instrument that day, although he did sing a few songs. We also met one of the singers that Janta had met 20 years ago – a dear old lady living in one of the most simply picturesque places I’ve seen in Latvia. We also asked around about other singers and musicians that were still alive. One lead led to another, and pretty soon we had already stopped in at about seven or eight houses.

This had been a more or less unannounced reconnaissance expedition, and so we expected that it would be difficult for people to open up to us, much less remember songs or tunes or dances from earlier days. A couple of the women said that they didn’t really have time to sit down with us, because the village was preparing for a funeral, and they had to go sing psalms that evening [The tradition of singing psalms on the evening before a funeral is still very much alive in predominantly Catholic Latgale]. This piqued our interest, since every parish or village has its own versions of the psalm melodies, yet most of those familiar with them are older women, meaning that the psalm traditions will probably die out within the next generation. Besides, folklore associated with the Christian tradition has been given relatively little attention in Latvia. So we arranged to come back to Šķaune a few months later with proper recording equipment and once the summer farm work was done. One of the women we met, Helēna, was very forthcoming and agreed to help us organize the fall trip. She promised to get a couple of women together to sing the funeral psalms for us and also reserve the local hall for a pensioners’ get-together so that we could see the local versions of traditional dances.

Sigvards Kļava, the artistic director and principal conductor of the Latvian Radio Choir, heard about our plan through the musical grapevine and asked to join us. He is constantly on the search for new musical experiences and sounds, including those of the ethnic kind, and was hoping to hear the sound of genuine and unaffected singing on this expedition, which, needless to say, he did. Folklorist Iveta Tāle and two other singers from the traditional singing ensemble Saucējas also teamed up with us, bringing our fall expedition’s total to eight people. We feared that such a large group might intimidate people, but actually it allowed us to split up and thus cover more potential Šķaune singers and musicians in the limited time that we had.

On a Friday afternoon in November we arrived at Helēna’s house in Porečje, a village southwest of Šķaune, with recording equipment and giddy curiosity, not knowing what to expect. Helēna, though, was in the kitchen baking cheesecakes and expecting the arrival of ten women from the surrounding area to sing their funeral psalms for us. I helped her out in the kitchen while Janta arranged tables and chairs in the living room. The only things allowed on the table when singing psalms are psalm books, a white tablecloth, bread, and salt. And then we all sat down to two hours of non-stop singing, although it is said that in earlier times the singing of psalms used to go on all night. One psalm segues into a reading of sacred text, which then seamlessly moves on to the next psalm. There are no breaks in the mood and every woman knows what comes next and when it’s her turn to read. One psalm can easily last ten minutes, the chant-like melody repeated over and over until it becomes a meditation, while the listener floats between boredom and enchantment.

On Saturday we turned to more secular interests and drove around the area to visit a few of the women from the previous evening who seemed good candidates to know more songs, as well as seek out other people whom we had been told liked to sing or play music. Of course, some of the leads turned out to be dead ends – either we couldn’t find the house, or the person wasn’t home, or had already died, or didn’t have an instrument anymore, or was too drunk to play. Other leads turned out to be fruitful. I was very moved by a haunting koroņka – a song to the Virgin Mary – sung by an old woman who lived all alone and could barely walk but exuded an extremely positive outlook and began every morning with this song, which also lasted about 10 minutes. Although we encountered a few puzzled looks as we drove around, no one was mean to us and most people were in fact very hospitable and sweet. Not only does it take guts to walk up to a strange house, but it also takes guts to let strange people into your home who ask you – of all things – to sing!

On Saturday evening, together with Helēna and her neighbor, we readied the Porečje village hall for an evening of dances. The large free-standing wood stove located in one corner of the ballroom was already warm, the table was set with foods from both Riga and Porečje, and three imported musicians (because there aren’t enough left in Šķaune who still know the traditional dances) began to play tunes based on old recordings from the Šķaune area. The evening got off to an awkward start, because the locals were not used to outsiders being interested in their dances, nor had they danced much since their younger days. But eventually everybody, including us, warmed up and the evening ended with more singing – this time all of us together, exchanging favorite songs.

On Sunday we returned to the house of Jānis Andžāns, a drummer in the village of Punduri and the brother of the violin player that Ilmārs and Janta have kept in touch with all these years. Jānis and his wife seem to be sort of loners and are not easy for a stranger to befriend. They had also not come to the village hall the night before. But we had a sneaking suspicion that the wife, Leontīne, might be quite the singer. It turns out that Helēna is a friend of Leontīne and thus smoothed our way to the Andžāns’ house. Once inside, Leontīne’s brusque demeanor softened, and we spent a couple of hours in their cozy hill-top house, singing, talking, eating lunch, and trying to avoid too much contact – both ours and Mr. Andžāns’ – with some surprisingly smooth homemade vodka.

Every Latvian has heard of Krišjānis Barons collecting and systematizing the Latvian dainas, or folk verses, in the late 19th century. Many also know that composer Emīls Melngailis wrote down thousands of folk melodies that he heard while traveling throughout Latvia in the early 20th century. They were not the only ones; linguists, composers, and other enthusiasts had done similar work before them and continued to do so throughout the 20th century. The late 1980s saw a resurgence in the collection of folk material, this time carried out by young folklore ensemble participants. The collection of Latvian folklore continues today albeit not very systematically and despite the pickings in regards to “old” material now being much, much slimmer.

But the days when every rural woman knew scores of regional folksongs are gone, and likewise hardly anyone in the villages plays the old traditional dances anymore. In that sense, the heyday of folklore collection in Latvia is over. When asked about folk songs, several women in Šķaune just pulled out printed booklets of well-known songs and began reading. But every once in a while one still comes across an “old” folksong, a “rare” variation, a splendid ziņģe, or some interesting dainas – little treasures, or berries, as one might say in Latvian. Of course, folklore is a very fluid thing that includes our modern lives as well, and nobody’s definition or appraisal of a folksong should be considered definitive dogma. In other words, older shouldn’t necessarily mean better. Thankfully, the general thinking now in Latvia is that everything a teicējs (traditional singer or narrator) says is valuable, no matter whether it’s a song that no one has ever encountered before, a regional variation of a well-known dance, Catholic songs and traditions, a narrative about his or her life, the idiosyncratic manner in which the person sings/plays/speaks, or even just the environment in which he or she lives. With that in mind, we made video and audio recordings of all three of our days in Šķaune, which have been given to the Archives of Latvian Folklore (Latviešu folkloras krātuve) in Riga. We also plan to keep in contact with Helēna and the others and return to Šķaune, perhaps already in May, the month when the women gather at road-side crosses to sing sacred songs to the Virgin Mary.

This article was originally published in 2008 in Jauno laiks, a supplement to the Latvian-American newspaper Laiks. 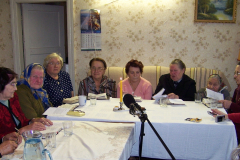 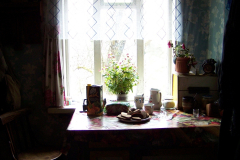 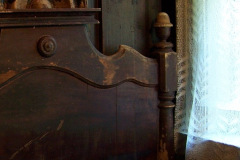 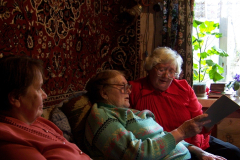 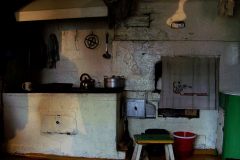 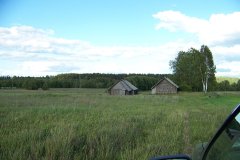 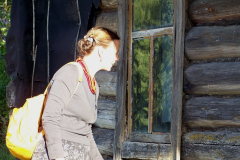 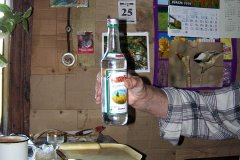 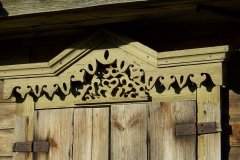 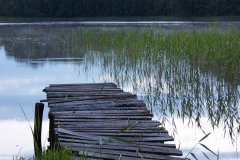 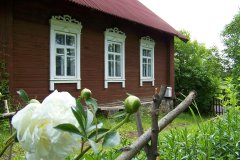 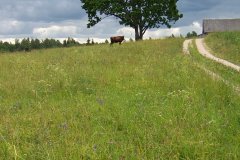 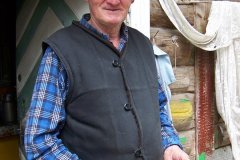